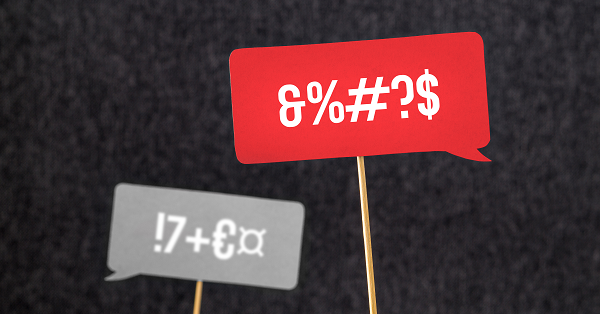 Given that we spend a large portion of our lives at work, often in stressful situations, it is understandable that some of us may drop the odd f-bomb at work. Some workplaces accept swearing as a part of the modern vernacular, encouraging its use to emphasise an argument or express excitement. In other workplaces, swearing may be seen as highly offensive, particularly around co-workers or clients, and will tend to result in disciplinary action being taken against the employee who crossed the line.

Prior studies have found that employees who frequently swear in the workplace may lose out on a promotion, with 57% of employers saying they would be less likely to promote someone who swears as it calls their professionalism into question, demonstrates a lack of maturity and control and makes an employee appear less intelligent. Despite this, employers are not innocent, with 25% admitting that they have sworn at their employees. With employees often taking their cue from management, it is important for both managers and employees to understand what is appropriate, and what isn’t, before throwing an expletive into a workplace conversation or taking disciplinary action against an employee for the use of an expletive.

Can employees be dismissed for Swearing at Work?

Whilst it may seem obvious, not every occasion an employee swears is likely to warrant the intervention of an employer or manager. The context, the type of swearing, and the audience are all important factors in determining whether swearing in the workplace is inappropriate. It is also imperative that employers have workplace policies in place to regulate the use of such language.

While everyone has a different level of tolerance for hearing swear words, it is generally accepted that the context to swearing is critical. It is commonly accepted that a swear word in and of itself is not offensive, without context and purpose. A swear word dropped in casual conversation is much less likely to be considered offensive than a swear word directed at another person, for example. Swearing, when combined with aggressive conduct or tone, is much more likely to offend, and should be more carefully scrutinised.

Swearing at a customer, as most would correctly assume, has been found to be grounds for dismissal. In Roderick Macdougall v SCT Pty Limited T /A Sydney City Toyota [2013] FWC 1077, an employee was terminated after he swore at a customer. The Fair Work Commission (the FWC) rejected the employee’s unfair dismissal claim as customer service was a key part of the employee’s job and his conduct threatened the profitability and reputation of the business.

An important distinction in many cases is whether the swearing is used whilst in a general discussion to describe an inanimate object, for example, a malfunctioning printer, or whether it is specifically directed at a particular person. In Mark Baldwin v Scientific Management Associates (Operations) Pty Ltd [2014] FWC 5174, an employee who swore at his manager using extremely crude and profane language in a threatening manner and had caused his manager to become fearful for his own safety was found not to have been unfairly dismissed. The FWC said:

“There is… a qualitative difference between swearing in the workforce per se and swearing directed to one’s manager (or to another employee) which is not only offensive but highly personalised.”

In Boris v Metcash Trading T/A Metcash [2019] FWC 3993, the FWC upheld the dismissal of a store person. It was alleged that during a performance meeting the employee was acting aggressively, by standing up and leaning over the table, while others were sitting, raising his voice and saying, “this is f…g bullshit” and “Carol never f…g helps”, Carol was not present at the meeting. The employee tried to justify his conduct by generally referring to case law that said swearing was expected in a blue-collar workplace. The FWC did not accept that swearing by any party was acceptable during performance meetings, noting the employee’s behaviour was ‘disrespectful, inappropriate and unreasoned’. The FWC dismissed the employee’s unfair dismissal application and refused his appeal application.

In contrast to this decision is Gary Matthews v San Remo Fisherman’s Co Operative [2019] FWC 4877. Mr Matthews was fired for saying “what you did was very f…g disrespectful” during a conversation with his supervisor, Mr Mannix. Later during the conversation, Mr Matthews apologised for swearing. During the meeting Mr Mannix, in response to a question from Mr Matthews, said it was “effing offensive that you would make such an accusation”. The FWC called the differentiating of the words ‘f…g’ and ‘effing’ an ‘exercise in hair splitting’ as they have the same intent. The FWC held that even though the employer had a valid reason for dismissing Mr Matthews, his dismissal was harsh and unreasonable because it was not proportionate to Mr Matthews’ actions. In particular, Mr Matthews’ swearing was in frustration and not directed aggressively or as a threat to Mr Mannix. Further, Mr Matthews and Mr Mannix were ‘two mature and experienced individuals’, they had known each other for a long time, previously had a good relationship and Mr Mannix gave ‘as good as he got’. The FWC ordered Mr Matthews’ reinstatement and continuity of service. Based on the particular facts of this case, the FWC did not order compensation for lost earnings.

In some workplaces, swearing at work may be normal and even used as a way to motivate employees. Research has found that swearing can foster team bonding. However, swearing also has the potential to offend, bully and intimidate. It is important to differentiate the type of swearing that is being engaged in, before taking disciplinary action.

Workplace policies serve a number of functions. They are an important organisational tool for disciplinary purposes, but they also set the standard for what is expected of employees in the workplace (see our publication on workplace policies for more information).

Swearing, in particular, can be experienced by people in vastly different ways. One person may have a very high tolerance for swearing, while another may find certain robust swearwords to be offensive in any circumstance. The paramount consideration should be the health and safety of the employees. When drafting a workplace policy, employers should not consider the majority view amongst employees about what is appropriate, but what conduct could be considered offensive to employees, taking into account any special considerations. A code of conduct should provide clarity to employees and act as a benchmark for their behaviour and their language in the workplace. The paramount consideration is to create a safe workplace.

It is equally important that any workplace policy relating to swearing is enforced consistently among employees.  It is not open for employers to set a ‘zero-tolerance’ policy against swearing in order to manufacture a reason for dismissal, where the code of conduct does not expressly state that there is ‘zero-tolerance’ for expletives and/or where this has not been strictly upheld against all employees equally in the past.

Where the circumstances of the use of expletives is different, it is understandable that the consequences are different too. It may be entirely reasonable for one employee to receive a warning for their use of language after a casual slip up, and another employee to be dismissed for shouting expletives at a client or customer. These disciplinary processes, though different, are not inconsistent. However, if an employee is dismissed for swearing in an email to their manager, where others have done so in the past without disciplinary consequences, it can be found by a court or commission that the dismissal was ‘unfair’ within the meaning of the Fair Work Act 2009 (Cth).

For example, in Symes v Linfox Armaguard Pty Ltd [2012] FWA 4789 an employee was dismissed after he told his supervisor to “get f…d” and complained about the “f…g roster”. The employee later apologised to his supervisor. The employer had not historically ensured compliance with the ‘no swearing’ policy in place at the workplace. Whilst the FWC found that the swearing did amount to misconduct, to dismiss the employee because of his swearing was unfair when other employees had not been previously disciplined.

As with any instance of misconduct, it is crucial that any allegation is put to the employee in writing. The employee should be given sufficient detail of the incident of misconduct so that they can recall the incident and reply to the allegations against them. For this reason, it is imperative that an employee is advised in their letter of warning, or show cause letter, the exact word/s that they used that had caused offence. In most cases, it will not be sufficient to use vague terms such as ‘offensive language’ or to try to disguise the written word as ‘f***’ or ‘s—’, in the hopes that the employee will understand which exact expletive was used. It is best to always put enough detail in the letter that no reasonable person could misunderstand what conduct has warranted disciplinary action. Employers should also always expressly state to the employee that their conduct is in breach of a workplace policy, with reference to the specific policy and clause that has been breached.

What are the vital considerations in attempting to manage workplace swearing?

Consideration should be given to the whole of the conduct and context before taking action, including:

Employers and managers should take particular care to regulate their language in the workplace. Likewise, employers should not disregard poor language if it has the potential to offend or cause harm to other employees, otherwise the employer may be seen to be condoning behaviour which could amount to bullying.

Having a sensible workplace policy in place can provide guidance to employees as to the appropriate language expected within the workplace, without employees feeling too restricted by what they can and can’t say. A policy that is correctly implemented and consistently applied can also provide employers with a source of authority should disciplinary action be necessary against an employee.

If you require any advice or assistance with your workplace policies, our team is happy to help. Contact us here.

We also discuss Swearing at Work in our podcast. Click here to listen.